We are pleased to present all reviews in their original language.

Just as the acid test of a new composition is whether it survives beyond its first performance, so the test of an outlandishly ambitious cycle of new music is whether it survives beyond the first composition. Using that acid test, Jean-luc Fafchamps Sufi Word cycle is the real thing. Back in 2012 I wrote enthusiastically about the first release by Sub Rosa in the cycle. This was titled KDGhZ2SA, a Six-letter Sufi Word and was performed by Ensemble Ictus and the Orchestre National de Lille conducted by Peter Rundel. It was followed in 2016 by the second work in the cycle, offering equally chewy music with the equally click-hating title of YZ3Z2Z1S2, a Five-letter Sufi Word.

H1KhH2WM (Du Seuil), a Five-letter Sufi Word […] is another sonic and cerebral spectacular, this time expertly performed by the Ensemble Musiques Nouvelles, Centre Henri Pousseur; conducted by Jean-Paul Dessy. This music digs so far beneath the crusty surface of today’s stylistic correctness you will need a flashlight and mining tools to find any mention of it on social media. Which is just one of many reasons I am strongly recommending it.

From post-modern to post-everything – On An Overgrown Path

There has been a flurry of interest on social media in Belgium composers, so I am giving a heads up to a composer who is unlikely to feature elsewhere. Jean-Luc Fafchamps was born in Brussels in 1960, and his music is topically relevant because of its transcultural sub-agenda and its brutally contemporary idiom – one reviewer has described him as writing in an “appealingly post-everything style, with diatonic minimalist gestures butting up against wheezy microtonal drones and so forth”. Jean-luc Fafchamps is not a Sufi or a Muslim, but his quest for a compositional system based on analogue correspondences led him to the symbolic charts known as Sufi Words created in 16th century Mughal India. He uses Sufi symbology as a compositional tool in much the same way as John Cage and his circle used the I Ching, and my 2012 post gives more details of his composing system. Lettres Soufies is envisaged as a vast network of cycles, two of which have been recorded by the Brussels based Sub Rosa label. There is an extended sample below to allow you to decide for yourself if Jean-luc Fafchamps’ music is appealingly or appallingly post-everything.

[…] Here the Belgian musician – always remaining true to his nouveau classical approach – has released a record that includes both a CD and DVD. The work contains two distinct compositions both inspired by one clear musical idea: to choose simple electronic instruments – cheap and easy to use – and “put them to work in a mostly-theatrical way.” The world premiere of Beth/Veth was facilitated by Stephane Ginsburgh at the Conservatoire Royal de Bruxelles. Here Fafchamps continues to delight us with a composition rich with recorded percussion and electronic abstractions. 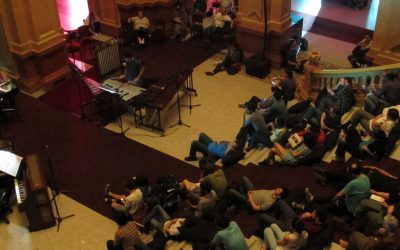 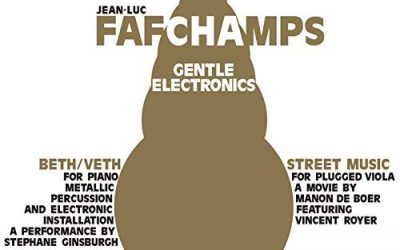 […] ‘Beth/Veth’ is a forty-eight minute piece for piano, metallic percussion and electronics.[…] This piece has a very modern classical feel to it, with a very light touch at the piano most of the times, and the percussion being somewhat oriental in approach. The pianist (Stephane Ginsburgh ) of duty here plays these. A piece that moves through various sections and which is a true beauty.

On DVD we find ‘Street Music’, for ‘plugged viola’ (played by Vincent Royer) […]. There is a slow 360-degree panorama shot of the environment and shots of the violinist himself. He plays a very vibrant, wild piece, reading from a score with instructions […]. The music is very loud and wild, but looking some of the bystanders’ reactions, it seems it wasn’t that loud on the street itself, but judging the applause, people enjoyed it; so did I, a lot actually.

The work of noted Belgian composer Jean-Luc Fafchamps was hitherto entirely new to this reviewer. Materially, and in terms of attitude, direction and format, however, there is nothing here that would immediately surprise or trouble those with a working knowledge of avant-garde and contemporary orchestral music. Fafchamps’ chosen language, along with its organisation and manner of delivery, sits comfortably with the likes of, say, Harrison Birtwistle, Mark-Anthony Turnage and early Peter Maxwell Davies, or, for that matter, Boulez, even those earlier moves set in train by Messiaen, Schoenberg, Bartók; that is to say in ranging over some kind of drifting admix of Serialism and reactions to it, some measure of atonality, perhaps including appropriations of or allusions to such things as non-Modernist song-forms, folk-ish stylings, etc., even Jazz, even Rock, perhaps including experimentation with electronics, and so on.

This passing sense of general familiarity is, though, successfully tempered with some pleasing detail revealed upon closer inspection. Careful listening draws one into the many intimate scenes which Fafchamps faithfully sets up; which might be comprised of delicate, lacy piano, beautifully trickling onto soft sheets of burgeoning pastoral woodwind, or pillowy, near-comic flights of gymnastic brassy commotion over brooding, malevolent sub-bass. Elsewhere, there are scurrying noises in the undulating undergrowth – the tortured strings of a cello, a viola, a violin. Some passages approach the world of drone music, in being entirely flattened, seemingly mutely ticking, counting out time. Indeed, instantaneous, savage cuts are made to some of these, wherein the listener is brutally thrown back by loud, vertiginous walls of sound. The best of these avoids the simple charge of staged melodramatic ambush, instead creating genuine, intelligent shock and real power. Such shifts confer a healthy dose of dynamism upon the enterprise as a whole, in fact; and this basic to and fro is a key motif of the album itself and perhaps its strongest feature in terms of composition.

Soloists and solo sections shine best overall, in my view. Spotlighted instruments are convincingly stress-tested, and there is a palpable and arresting extremity of technical execution on display; putting one in mind of something like Berio’s ‘Sequenza’ series, or the way Stockhausen treats instruments in his seminal, ‘In Freundschaft’, or, perhaps more exactly, the kind of unabashed virtuosity associated with Free Jazz. Here, one assumes the use of hard-won extended techniques – dextrous double-tonguing of mouthpieces, producing delightful squawks and squeals, the extraction of forced harmonics on brass and strings alike, by over-blowing and over-bowing, respectively. The result is visceral and muscular, and, moreover, expressively human. Most notable here, to my ears, is the trombone of Alain Pire. Added to the feats referenced above, his particular instrument, for its sins, is always threatening to reference its use in comedy. It’s a bit Goons, a bit Tony Hancock; it is the orchestra’s kazoo and Swaneewhistle combined. This humorous veneer lends itself constructively and colourfully to the otherwise fairly solemn proceedings. Jean-Luc Plouvier’s piano is also worthy of mention. His tumbling, muscular arpeggios cover the whole keyboard – during a series of demonstrably physical displays, played seemingly straight from the elbow, maybe the shoulder, with wilful abandon. Here, such bombast is decidedly refreshing.

According to the extensive sleeve-notes, there is some grander plan at work here; in the form of a conceptual system, devised by Fafchamps, which underpins and guides decisions that he made as composer, and which is an integral part of his wider message. This takes its cue from Sufi mysticism, Fafchamps explains, specifically from the 28 letter Arabic alphabet, formed, in turn, of numerical conceits derived from it. I confess both to a complete ignorance about such things and to a disconnection with exactly how these apply to the music itself. Perhaps, in the end, this is no bad thing. Certainly, it is no impediment to appreciation.

Battle of the Sexes in Bartòk / Mikrokosmos – New York Times

The final installment of the Lincoln Center Festival’s retrospective of early works by the Belgian choreographer Anne Teresa De Keersmaeker began with something conspicuously absent from the preceding three pieces: a man. […] And on Tuesday, when “Bartok/Mikrokosmos” (1987) had its New York debut at the Gerald W. Lynch Theater, he took the stage in front of two facing pianos. […] As Ms. Saunier jumped into Mr. Truszkowski’s arms, the pianists Jean-Luc Fafchamps and Laurence Cornez launched into Bartok’s “Mikrokosmos.”

[…] The following section, a dance-less interlude, was in some ways an echo. Playing Ligeti’s “Monument,” the two pianists, a man and woman, alternated between tangling in the same aural space, the same register, and retreating to opposite ends of their pianos, as the dancers had regularly retreated to opposite sides of the stage. The musical duet was similar to the dance duet, but the music was more interesting.[…] The pianists played wonderfully, and so did the Ictus string quartet in the last segment, set to Bartok’s Quartet No. 4. […]

Cog-like process-music, a central rhythmic spine is examined, twisted, atomised, and quite often discarded entirely. Jean-Luc Fafchamps’ Back To…, here performed by Stephane Ginsburgh, consists of three individual piano pieces that can be combined in multiple configurations. While not attempting all of the suggested orderings, this writer found the standard 123 sequence particularly entertaining; the first piece’s frequent diversions into key-smashing tantrums acting as an effective starter for some of the lighter and winding Reichian passages occurring later. Encompassing a wide range of tones and pressures, this absorbing album holds the attention throughout; rapid minimalist passages abut stormy atonal cloudbursts; near silence introduces sections of intricate ringing beauty; the dense fusion of styles is never over-cooked. Back To… deserves your repeated and close attention; it is a twisting kaleidoscope of an album, shards of noise and melody clashing in complex and fascinating fashion.